Biogas is one of the most increasing energy production system over the world. The benefits from biogas are remarkable as long as the producer knows how to produce, treat, improve, and distribute it.

In this new post, we will focus on how to increase biogas efficiency, the most useful part of biogas coming from biodigesters, and the one used to work engines. 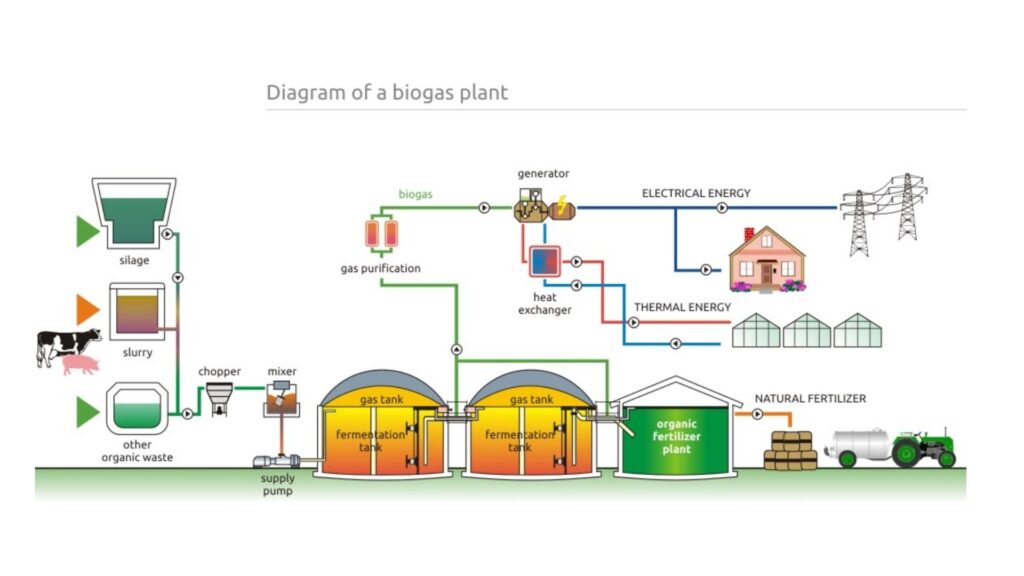 Biogas is generated in various ways, generally in closed digesters where there is no oxygen. The matter inside the digester decomposes and, in this process, generates the so-called biogas.

The produced gas contains different levels and concentrations of compounds such as methane, ammonia, etc. This “raw” gas must be purified so that other compounds do not damage the engines where the gas is going to provide its energy.

Biodigesters feed, in general, on waste produced by humans, industrial, domestic activity, etc. Depending on the power they receive, the usable gas production parameters vary considerably from one digester to another, and this is the main problem faced by the operators of the facilities.

The facilities where Urban Solid Waste are processed, for example, are usually more unstable since they do not always feed the digester with the same material.

On the other hand, the production facilities know at all times which are the inputs the digester receives, since in general, they come from the company’s industrial production activity.

What does improving biogas efficiency contribute?

The improvement in the efficiency of the biogas produced can have a direct impact on business operating accounts, whether it is used for self-consumption or to sell the energy produced to the electricity grid.

Efficiency can be measured in the time it takes to biodigester the material that is introduced into the digester. If the digestate contains a lot of cellulose, the degradation process may be too long for the times normally used in the industry.

In short, we can improve the efficiency of the digester by improving the quality of the biogas by increasing the methane concentration and making digestion faster.

Reduction of unwanted chemicals in biogas

Currently, the operators of biogas production plants use additives that control the concentrations of unwanted compounds such as hydrogen sulfide (H2S) or ammonia (NH4).

These chemicals are the main causes of corrosion, both in the digesters themselves, and in the engines that generate energy from the biogas.

With the additives, enormous resources are avoided in the maintenance and repair of this equipment. We talk about these additives causing, for example, a 90% drop in NH4.

Amapex, in addition to knowing how to operate with these additives to obtain the best results, thanks to internal research, we have achieved something new and revolutionary: to reduce the digestion times of cellulosic materials, in a way that breaks down the lignocellulosic chains and their fragments they are digested faster by the digester’s biological consortium.

The system that we have been able to design consists of the previous digestion of the cellulosic material under anaerobic conditions to make the material they need for the production of biogas accessible to the bacterial system of the digester.

As it is the previous anaerobic digestion, a high percentage of unwanted compounds, H2S and NH4 mentioned above, do not reach the digester, thus reducing the amount of additives needed to maintain the stability of the system.

We have achieved results in that the increase in biomethane at the outlet of the digester represents more than 15% compared to the previous process of the plant.

Until now, it has not been possible to accelerate this process of digestion of cellulose, which on the other hand is one of the residues that is most produced worldwide, mainly from cereal crops, among others.

The research carried out by Amapex has led to the discovery of how to speed up the digestion process using a selected strain of a bacteria that is particularly effective in decomposing organic waste.

The selected strain is versatile and manages to work in aerobic and anaerobic conditions, but, for the process to be accelerated, it is important that those conditions are the same from the beginning of the process.

Although the bacterium changes its metabolism to adapt from one situation to another, this process would lengthen the times of its effectiveness.

As it is a living being, the decomposition of the matter is completely natural and does not produce adverse effects for the biodigester, and it does not generate additional waste.

Also, it is important to know that, once the process has started, the bacteria reproduce and their effectiveness increases over time.

The process is applicable in any type of digester whose purpose is the creation of biogas. Each case is studied how to improve the efficiency of the system before carrying out the action; It is a system designed by Amapex and very versatile in its application since the circumstances are determined on a case-by-case basis.

In each case, it is necessary to make a personalized analysis of the circumstances of the specific industry, in order to adapt the solution to obtain a purer biogas and thus achieve an energy-efficient increase of biogas.

The research that has led to these excellent results, on the increase in biogas production and the acceleration of its process, has been carried out thanks to the collaboration of two prestigious universities in the biotechnology sector:

This system has been tested in conjunction with the Autonomous University of Barcelona, achieving an increase in biomethane in the biogas resulting in biodigesters with a cellulosic digestate such as flax remains.

The study carried out will soon be published soon by the Universidad Autónoma de Barcelona in its repository, which we will share in due course on our website.

Thanks to the participation of the University of Ottawa, we have developed a system to accelerate the biodigestion process for the production of biogas with vegetable fibers and high cellulose content.

The results have been excellent, accelerating the entire process by 70% compared to the initial values ​​of the digestion process of this type of matter.

The study carried out with our system will be published shortly with the collaboration of the Four Gas company.

You can find more information in the description of the process in the web section here. If you want to know more about the process, our products, or for us to carry out a study on how to improve your biogas production facilities, do not hesitate to contact us through the web form.